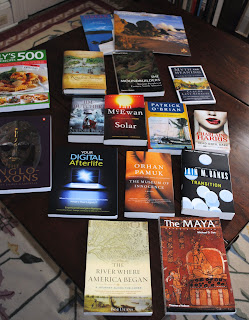 I watched “You’ve got mail” last week. The movie came out in 1998 and the ironies were writ large when on Saturday I went to the Borders closing sale. We bought fourteen technologically redundant books for a little over a $100. The big box bookstores (like AOL itself) are now threatened into extinction by e-books and online retailers.
One of the books I purchased was Your Digital Afterlife – an examination of what happens to digital assets after death. I wonder if Tom Hanks and Meg Ryan archived their email romance, or if all those love letters were lost in the ether. Today they’d be on a dating site, or tweeting, and I suspect their electronic exchanges would be even more ephemeral.   When I was in college I got and sent letters from friends. These hand-written missives were much longer, and more considered, than the emails, or Facebook posts I get now. They’re in a box in a cupboard - not that paper is the perfect archival material.
As a developer I’m both intrigued and worried by the pace of change. Now its mobile applications; clearly the predominant tool for the under 30’s. Are we reducing complexity, or are the small screens just another challenge. Social is the new Flash, and everyone is famous for 140 characters. We can say it, show it and play it, but we’re still working out exactly how we understand it all.
As we were leaving the bookstore Saturday we passed a sign. LP’s $1. I bought 7, all from bands in the 70’s and 80’s. Nice to hold an album, and be able to appreciate the cover art. Does anyone listen to albums anymore, or just downloadable “singles.” Now where can I buy a record player…
Posted by Mark at 7:20 AM No comments: