Brown’s engaging read can serve as a primer for looking at video games. The first section, poetics, looks at video games through the lens of storytelling, aesthetics and film. He points out the two approaches of seeing video games: Ludologists who essentially see them as puzzles and Narratologists who see them as story. One difficulty in looking at games as stories is that they lack a clear central narrative  - but this is judging them as traditional literature. At their best games weave multiple threads, with the player a part of the story, presenting perhaps a conversation, or a shared performance, more than a telling, with an end result that is more “history”, rather than novel. Perhaps games have not yet found their Dickens, as Brown suggests, but we don’t judge all literature by the most hackneyed romance novels. The great works may be just around the corner, but they won’t be like books. This book does a good job in placing games in a wider context, but also notes that they remain ‘other’ – a point Brown re-inforces by pointing out how badly games have translated into movies!

I think Gee has argued that games are inherently educational, that their structure begets learning though the problem solving required in games. Brown, I think, would be more cautious, and in several places he emphasizes that games do not replace educators, but ask them to be more like guides, than the source of all wisdom. Some of the controversy over the use of gaming in schools is more clearly as discussion of what and how students should be taught, rather than a disagreement of the efficacy of the methods. But in the second section of the book, Rhetoric, Brown talks about the rhetoric of interactivity, the idea that playing a game, or perhaps using ‘playful mechanics’, is a fundamentally different engagement for students than reading, listening or watching. It’s an engagement that he sees relating to the teaching of empathy, but it also ties into different learning styles for different students. Maybe some, but not all, students will learn better this way.

In the final section, “pedagogy” he examines education, identity and communication, and finally “modding” using the tools of gaming to create new environments. He looks at the creation of social spaces and points out that for effective learning these spaces still need to be mediated. I personally doubt that shy students are suddenly ‘freed’ by a virtual identity, bullying still occurs on the online world. But equally an online environment changes the social dynamic, and its emphasis on non-verbal communication is clearly a benefit for some students.

In most of the literature I’m reading, and in this book, there seems to be a lack of clarity at times about what video games are. Some arguments seem to relate as much to games, as video games. Do video games have to consist of an immersive space? Are we criticizing the games, or the biases, and failures, of the gamemakers. How is the aspect of social media playing out in learning? While there is discussion of MMORPG’s how does playing alone, or in a group shape the learning experience? What are the implications for distance learning?

For both fiction and non-fiction I often feel that a books ‘success’ for a reader depends when it is read. For me this book served came at the right time, broadening my understanding and leaving me with the desire both to go back and re-read certain sections and follow some threads and questions into cyber space.

View all my reviews
Posted by Mark at 5:37 PM No comments:

The National Park Service consists not only of wonderful places; it also manages the objects and artifacts that those places possess. Working through a co-operative agreement between the National Park Service and the University of Tennessee, I’ve been leading a project to redevelop the current web catalog site, and work with parks to increase the number of items on the site.

The scope of the collections is extraordinary; more than 42 million objects including archeology, art, history, and ethnography objects, biology, paleontology, geology specimens, and historic photographs. Currently only a small percentage is available online, and graduate students at UT have been helping add records and images.

We imagine a number of different audiences coming to the site: students and educators, researchers and park visitors. We expect they’ll come with questions about the Civil War, about specific park collections, about the household belongings of , and many, many more.

The challenge is to create a site that answers the questions of a researcher looking at maritime history, as well as the casual visitor curious about the history of the Florida parks. It’s about seeing the objects not just as individual things but as part of a park, a collection, a historic theme, or an aspect of the rich cultural and bio-diversity of the United States.

The site will be available to the public in late summer.

Just put it on the web - how does a physical exhibit translate to an on-line one? 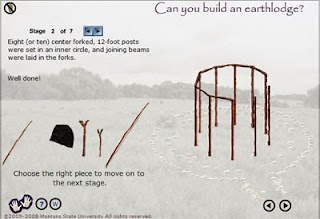 It’s an issue we’ve faced several times. Exhibits are an investment of time and effort, and can be given an extended life on the web. But it isn’t a straightforward transition. Visitors see physical exhibits in a rich context. They are prepared by the journey to the institution, view the material within the physical context of the building/landscape, and can enjoy it with family and friends who can share items of interest.

On the web they can arrive at the page as the result of mild curiosity after the page is presented from a tangential search. They are likely alone, and the exhibit can appear divorced of context.

Web exhibits then have to offer something extra to compensate. All the images, video and text can be included, but it’s also possible to have the visitor engage with the material.

Finding resources at the end of an exhibit is difficult, image permissions are different, staff have moved onto new things. But the web offers a chance to recharge the exhibit, and reach those visitors from around the world who can’t come to your site, but who you still want to reach.

*Playful mechanics are not the great guys from Car Talk, but a type of interaction related to gaming. For more, much more, see the excellent Play the Past.


The start of this book seemed like academic navel gazing, but he's clearly coming from a much more complex understanding of the evolution of what I know now as Digital Media and Learning. At present I'm much more interested in the work, than how the work is defined.
But the book is short and lucid, teaches me about literacies and and gets to the point: an exemplar, or worked example looking at Yu-Gi-Oh! and complex language. He breaks down the language on the cards, showing the complexity specialist language needed to understand them - and if you're playing you need to understand them quickly. And he suggests these are useful skills for learning, pointing to some literacy studies.
While he see's Yu-Gi-Oh! as an example of convergent media I think it's basically a card game - predating, I think, much of the web. Which argues that gaming in itself can be a great learning tool, outside of digital media. I think one reason why these games work is that they are played socially, competitively. The social dynamic makes a tremendous difference to their effectiveness. Would they work as well played alone? Can the computer act as an effective opponent?
Fun stuff and I'm off to read more!

View all my reviews
Posted by Mark at 12:58 PM No comments:

Archaeology, CRM and the Public 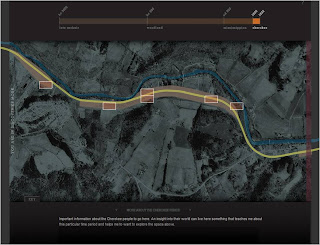 The work was paid for by the Tennessee Department of Transportation and conducted by the Archaeological Research Laboratory (ARL). The ARL is creating a public volume on the dig, but they also wanted to present some of the data in an interactive format.


The ARL provided the content, Sarah Lowe, Associate Professor at UTK, ran the project and put together the design and I worked on the interface. It allows the public to explore the site through an interactive map. The whole site is presented and visitors are asked to select a time period: Archaic, Woodland, Mississippian and Cherokee. For each period, areas can be zoomed to show features, and five artifact types can be explored through artifact and feature cards.

The module is a compromise: not all artifacts are shown, later historical material wasn't included and stratigraphy is simplified through the initial selection of a time period. But it supports several important archaeological considerations. Artifacts can only be accessed through their physical context. Text supports temporal and thematic context. Exploration and discovery are part of the experience. A second part of module talks a bout the archaeological process through video interviews, news reports of the dig and overviews of the artifact types.

The module will not be a research tool, but it does include data. Most importantly process is implicit in presentation. Showing the careful methodology of excavation, the lab work, and that the artifacts exist in a physical context all help separate archaeology from pot hunting and promote not just the site but the discipline.

The web site should be available later this year.
Posted by Mark at 10:34 AM No comments:

Filament games http://www.filamentgames.com/ created some educational video games, working with James Gee, author of Video Games are good for your soul (see previous blog).
Argument Wars, http://www.icivics.org/games/argument-wars, looks at legal cases. It must have been a challenging design concept. Computers aren’t good at parsing language, and this could have been a bad multiple choice game. But, by presenting possible arguments through a hand of cards, and asking players to decide which to play, and when, it make you pick a strategy. I think the cards could have been made a little more complex (larger hands, different types of cards: argument, support, evidence), but the game works, and is informative and fun.
I also liked Energy City. The first time I played I crashed and burned, but repeated play let me get more successful. It’s one of the things in their philosophy statement “Good games embrace experimentation and, by extension, failure.” It seems, with the dogged insistence on GPA that the education system at present doesn’t allow “good” kids to fail. Yet we all know that we can learn more from failure than success. By working within a framework, allowing exploration and replay we can get better – and in this case maybe learn to save the planet.

And a headline like this http://news.yahoo.com/s/yblog_thelookout/20110202/ts_yblog_thelookout/tree-octopus-is-latest-evidence-the-internet-is-making-kids-dumb-says-group needs to be challenged and discussed (as indeed the reporters do!)
Posted by Mark at 9:43 AM No comments: