More fun to be had in the exhibit hall 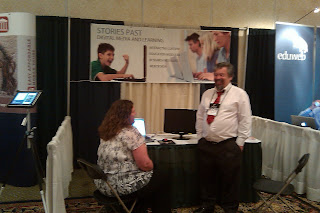 I’m sure there were some great papers at the AASLH conference, but I spent my time in the exhibit hall. Most people wander through at some point, and I had the unexpected pleasure of meetings some old friends.

So rather than talk about papers I’ll talk about neighbors! I’ve been following the work of Eduweb   for years and they’ve done some great stuff.  One of the great things they been doing is putting some resources into finding out what works. Check out the research papers at their site.

Opposite me was The Museum Bookmark Collection.  Their graphics and production quality were great. So good in fact that while I chatted across the room someone came up to my booth, ignored my material, and took the sample bookmarks I’d collected earlier!

Kapesni is on a mission to get mobile apps everywhere, and they have a very competitive pricing model. I think the current app is for iPhone with the Android app coming in a September.

Around the corner was Re:discovery  (where I worked for many years). Rediscovery is providing the back end of the upcoming NPS web catalog site which is getting some early testing. I’m very excited by the progress and early reactions. Plus they have an updated version of their archaeology module which is hierarchical, content rich and full of features.

Thanks to everyone that stopped by and chatted!
Posted by Mark at 10:41 AM